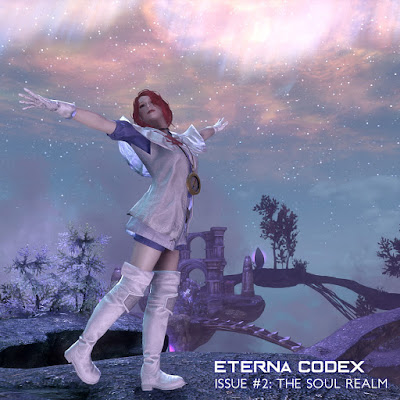 Hi there! Welcome back to another issue of the Eterna Codex blog series! Once again, I am your host, Evie Miessa, assistant recorder of Eterna Order's Recorder division. Today, we are going to dive deeper into Eterna itself, also known as the ‘soul realm’.

As mentioned in the previous issue of the Eterna Codex, Eterna is a special place that exists outside of space and time. It is the center of all other realms with countless portals that lead into different worlds and times. But why? For what purpose? Ah, but the title of this issue must have given it away, no? That's right, Eterna is the realm where souls pass through and be reincarnated into new lives. All the portals exist for souls to start a new life in another splinter section of the Eterna.

Okay, okay, if you’re thinking this sounds farfetched, just take a look at the history of your own planet. The ancient Egyptians believed in reincarnation too, and their civilization still holds and captivates even in modern Earth today. You also have the Mayans, Native Americans, and many religions on Earth that have documented their belief in reincarnation. You might be saying ‘but Evie! Those are all in the past!’. True, but time is flexible. If that’s too much to get your head around then look at your current time. Hindus, Buddhists and Pagans all believe the same. I do not expect you to take me on my words, but please just keep an open mind to its possibility. Allow yourself to be open to the concept.

Now, back to Eterna. Within this realm, everything feels ethereal and dream-like. Forms may transform their shapes and sizes, transcending labels. Colours may change from one moment to the next. Beings may teleport from one point to another simply with a thought. It definitely is a unique experience, or at least that’s what I find whenever I visit this realm. Although I am telling you all this like you do not know it, you have actually experienced all of it yourself when you were in your soul form. You have simply forgotten about it when you started your new life on Earth. That is no matter though as all will come back to you one day.

Within Eterna, there exists these souls who took on the job of being a soul guide. A soul guide is basically one who finds a lost soul, usually when a person's mortal life ends, and helps guide the soul into the Eterna realm to be reincarnated into a new life. On Earth, they are also sometimes known as death or grim reapers. But they really aren't as scary as most Earthlings believe them to be! Well, some of them are, but not all of them!

There are many different factions of soul guides. And the different factions all have their own ideas of how souls should be processed. Some have strict rules that base a person's merits in their mortal life to decide where they end up in their next life. Others value the freedom of the soul and allow them to choose wherever they wish to go. And some have no rules at all and would send souls to different worlds at random. And due to these different ideologies, sometimes soul guides would even get into fights with one another over a lost soul. Funny right?

As I mentioned in the previous issue, I learned about Eterna after I was recruited into the Eterna Order. But how did the Eterna Order come to learn about the Eterna realm in the first place? Well, sit back and I shall tell you the story.

Long ago, a most beautiful and kindest soul by the name of Cecily Trinitir was born in a magical world on the continent, Fodlan. She was born in a monastery under the Church of Seiros. The Church of Seiros was no ordinary church. Their members were a powerful force in this world and were revered by people all over the continent. Cecily's mother died shortly after her birth. Which caused suspicion to stir within her father. Her father did not trust the Archbishop of the church and tried to leave the monastery with Cecily. However, before he was able to leave, he suddenly fell very ill and passed away. And so, Rhea, the Archbishop of Church of Seiros raised Cecily as her own. Being young and lost in the world as an orphan, Rhea loved her more than anyone and gave her everything she could ever want.

Growing up, Cecily was a happy girl. She was always sweet and charming. Everyone in the monastery liked her very much. At a young age, she discovered her incredible healing magical abilities. In fact, no one in the history of this world had seen such potency in healing magic. And so it became Cecily's job and passion to heal anyone ill or injured. In a very short period of time, she became known to the world as the Divine Lady Cecily.

At the age of 21, war broke out on the continent of Fodlan between the three major nations. During what is now known as the Battle of Garreg Mach, the Adrestian Empire invaded the monastery with a massive army. During this battle one of the enemy commanders, Thales, cast a ball of destructive magic at Cecily. The magical ball pushed Cecily backwards on the battlefield - all the way to the edge of a cliff. The cliff broke off causing Cecily to fall where the blessed girl died at the bottom of the valley.

As Cecily's soul left her body, she was greeted by a soul guide named Shin Megami. He was a pale skinned, slender young man dressed in all black. Yeah, that's kind of the typical style for soul guides. Shin was assigned to be Cecily's soul guide to take her to Eterna so she could reincarnate into a new life.

Normally, actually, more like always, a soul guide is void of any emotion. That is one of the prerequisites of becoming a soul guide. However, due to Cecily's immense compassion shown within the Eterna realm, she caused emotions to arise within Shin and eventually, he fell in love with her. The two of them became lovers in the Eterna realm.

Shin took Cecily to many different worlds through the portals because he wanted to show her all of the beautiful worlds out there. However, while she did get to visit many beautiful worlds, she also saw much suffering in each and every one of them. Great evils such as demons and human tyrants caused suffering to the people of these worlds. I imagine that this is something you find easier to get your head around. You may have seen some of them first-hand or in a history book.

I am lucky enough to be able to tell you from my own experience that Divine Lady Cecily is an incredibly compassionate and loving person. She could not withstand the sufferings in all these worlds, and so she asked Shin if there was anything they could do to help all of these people residing in these different worlds. The two of them came up with a plan, that they would gather a group of compassionate and brave souls who shared their vision of bringing peace to all these worlds. They would use the portals in the Eterna realm to travel to these worlds and end as much suffering as they can. And that was when the two of them formed the organization now known as the Eterna Order.

And with that, the second issue of Eterna Codex is coming to an end. I hope once again you have learned much and have enjoyed your time reading what I had to share. Thank you for reading and I shall see you in the next issue. Bye bye!

PS: The Eterna record known as "Fire Emblem: Three Houses" took place in an alternate timeline where Divine Lady Cecily went back to Fodlan as a member of the Eterna Order to prevent the continent from turning into hell after Thales took over the entire continent in Cecily's original timeline.﻿